Zimbabwe
While Zimbabwe is a well-loved destination because of its sights and game it has a substantial bird population that draws thousands of visitors every year. It is a great destination for birders which boasts a number of important bird areas. Zimbabwe has over 600 bird species including a number of unique and endangered species as well.  We also get our fair share of migratory birds every year. Here is a quick look at just five interesting species one can look out for.
The Bateleur eagle is a snake eagle which is found in most part of Sub-Saharan Africa as it favours savanna locales. The bird is impressive because of feats of strength and phenomenal antics in the air, it has been known to ‘fly up to 300 miles a day 30 to 50 miles an hour looking for food. It is also special in the History and culture of the nation as it is said to be the inspiration behind the Zimbabwe Bird, a significant national emblem. The Zimbabwe bird is found on the National flag and is incorporated on the logos of many state-related brands including all local currency. Some sculptures of the Chapungu (as it is known in the local Shona dialect) were found in the archaeological exploration of the ancient city of Great Zimbabwe. Locals believed coming across the bird was a sign of good luck and it is symbolic of a protective spirit that watched over the people. Visitors can see one at Kuimba Shiri Bird Park.
The Ostrich is the largest bird species in the world. It can weigh up to 120 Kilograms and can run up to speeds of 70kilometres an hour but it cannot fly. It is well known for its distinctive long neck and powerful long legs. This bird is found in African savanna and desert territories. Ostriches are kept for commercial purposes in Zimbabwe and at one point Ostrich farming was very lucrative. People breed ostriches for their meat, feathers and hide which is used to make leather. Guests may have the privilege of sampling ostrich meat at select restaurants particularly in the resort town of Victoria Falls. Visitors can see one at Twala. 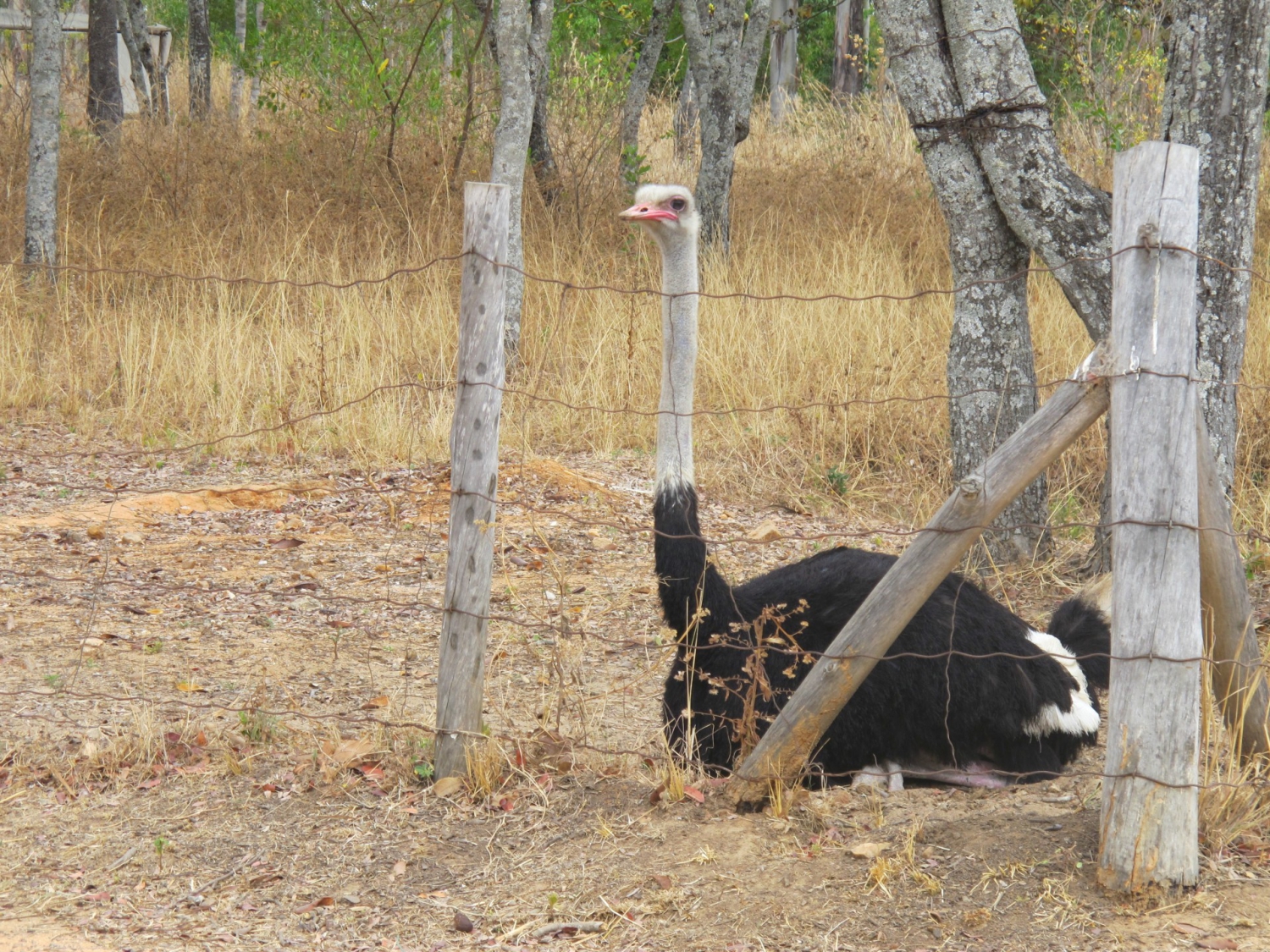 Vultures are scavenger birds which play an integral part in the ecosystem. There are six main species of vultures found in Zimbabwe, these are the White-headed vulture, the Palm-nut Vulture, the Hooded Vulture, Lappet-faced Vulture, White Backed Vulture, and the Cape Vulture. Vultures can be seen in many of the national parks where they roam free but even more interesting is to see them in action at the ‘Vulture Restaurant’.
Guests can get an opportunity to watch them feast at the Victoria Falls Safari Lodge where they hold a Vulture Culture event. This is a conservation effort whereby vultures are fed at a regular spot at a specific hour and quite a number living in the wild descend to feast on the meat served to them. It is quite an interesting event which is combined with a short talk on the birds, their behaviour in the wild and so forth. The activity is meant to raise awareness on how this bird’s existence is under threat around the world. It is a noble initiative indeed and it is fortunate the Vulture is one of many protected species in Zimbabwe under the Parks and Wildlife Act. 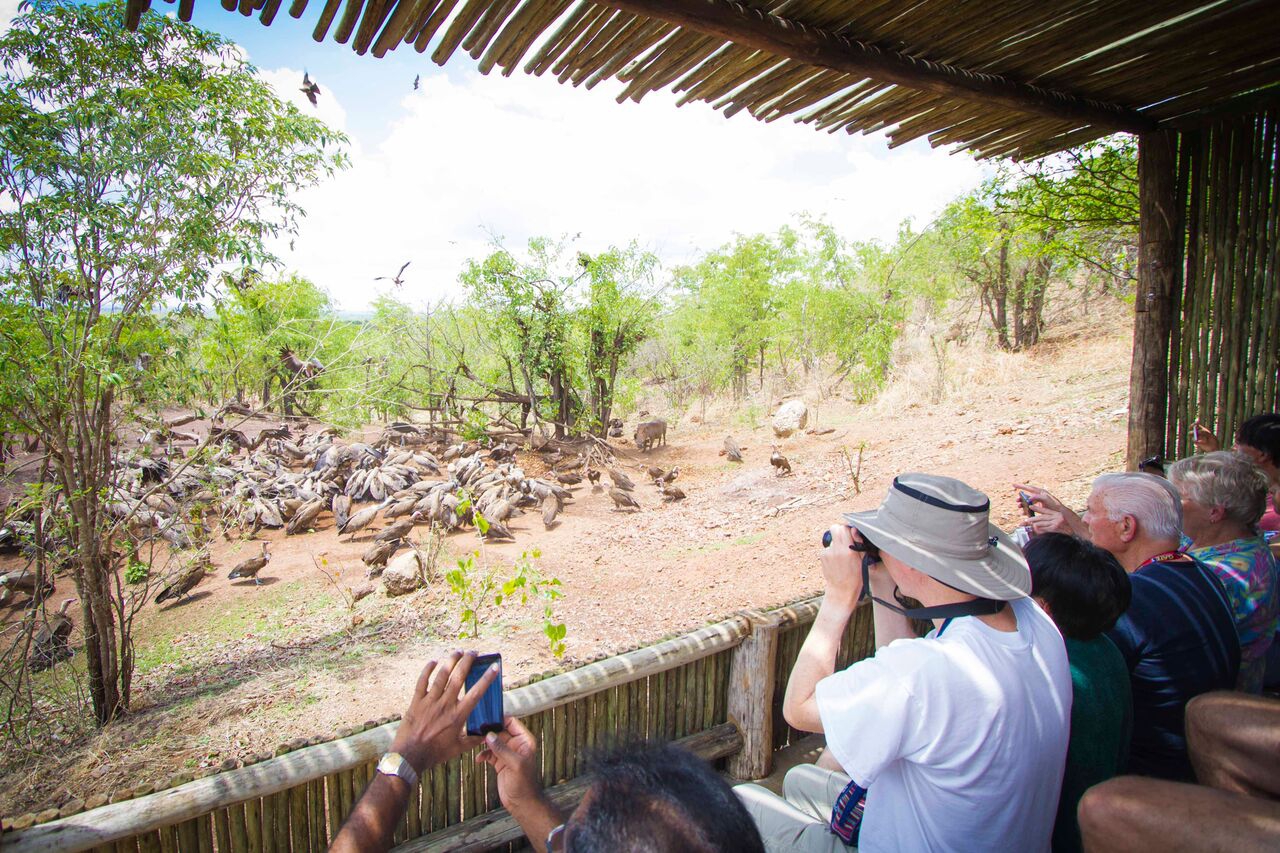 The Black Eagle is one of many eagle species found in Zimbabwe. It is a large bird of prey which can measure between 75 and 96 centimetres in length and can weigh up to 5.8 kilograms. It favours living in hilly areas. It feeds on rock hyraxes which are commonly found in the clefts of rock faces or mountain crevices. The black eagle is an impressive bird which has been known to attack much bigger prey like small antelope. They are most commonly found in the Matopos area of Matabeleland and in the Batoka Gorge within the Zambezi National Park.
The Livingstone Turaco is a member of the Turaco family, a medium-sized bird which is quite common in subtropical areas and more specifically in most parts of south-east Africa. It is related to the Grey Lourie which is commonly called the go-away bird. The Livingstone Turaco is a much prettier colourful cousin which was named after Charles Livingstone a brother to the Explorer David Livingstone. The Livingstone Turaco is also known to have a distinct cry as well.
Visitors can see it at Seldomseen in Vumba.
Written by: Vanessa Gambanga
PUBLISHED: Apr 21st 2022