One Day On The Almighty Zambezi –Rafting The Rapids!

After a short drive through Victoria Falls town and picking up the other participants, we arrived at the Adventure Lodge where we got some tea and coffee to get some early morning strength. Our rafting guide Simon gave us a full safety and behaviour briefing for the âgrade fiveâ Zambezi river. The briefing included a video presentation, the usage of the life vest and the safety rope. We should have known by then that this might not be as easy as we thought it would be. 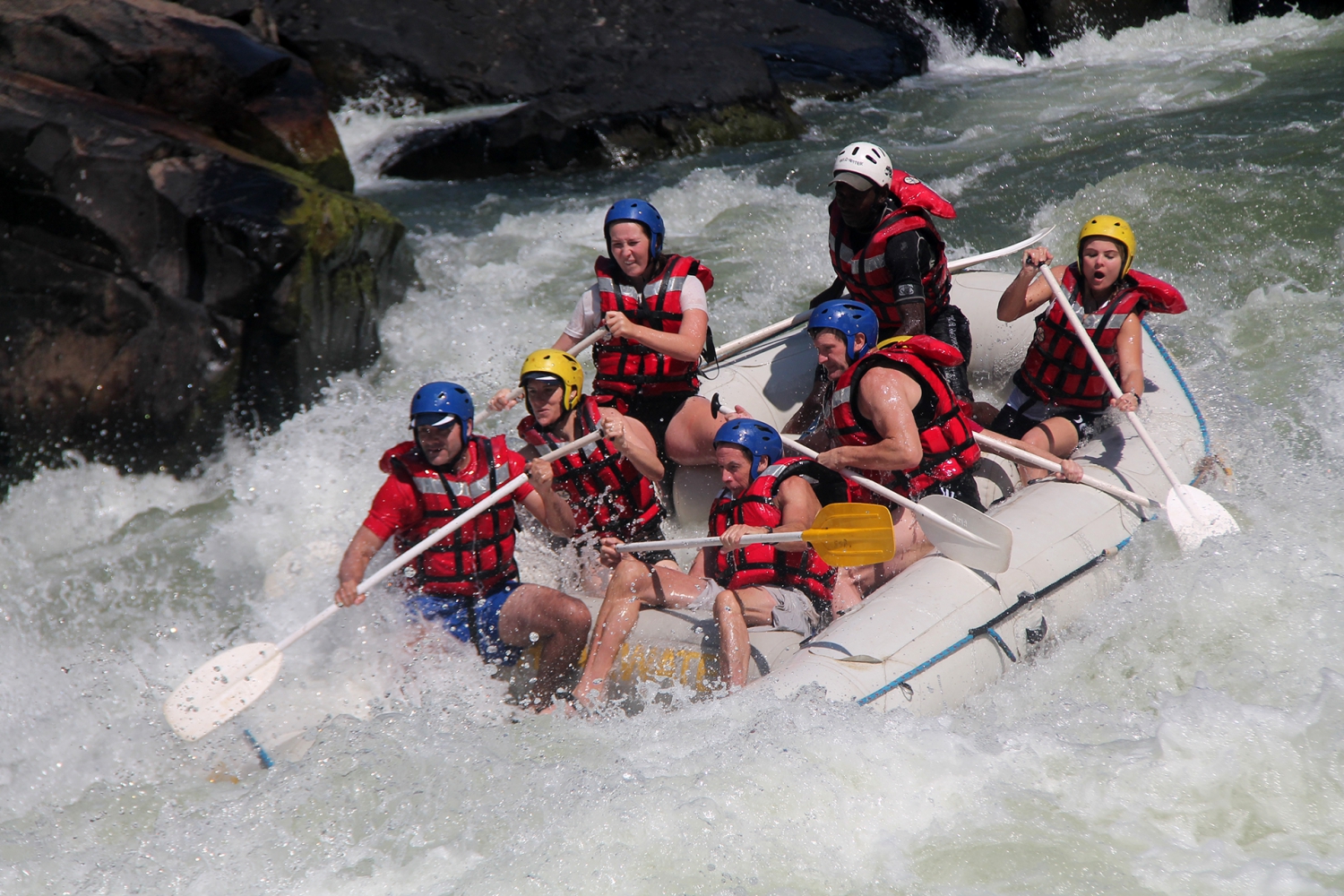 After all our questions were answered, we took a nice 15 minutesâ drive towards the bridge and the Gorge. And this is when we started our âyou-will-never-forget-that-day-adventureâ. We got supplied with life vests, a helmet and a paddle and off we went â hiking down the steep 100 metres into the Zambezi Gorge. On the way down, we could finally see the whole size and force of Mother Nature and, honestly speaking, it was a mixture of feelings, partly excitement and partly huge respect.

Once on the river, we hopped into the paddle boat. It is a kind of huge rubber boat, holding up to eight passengers, with ropes around the edge where you can hold on to. But only if Simon says that we could hold on because we already realised that this is no walk in the park â we would have to paddle! 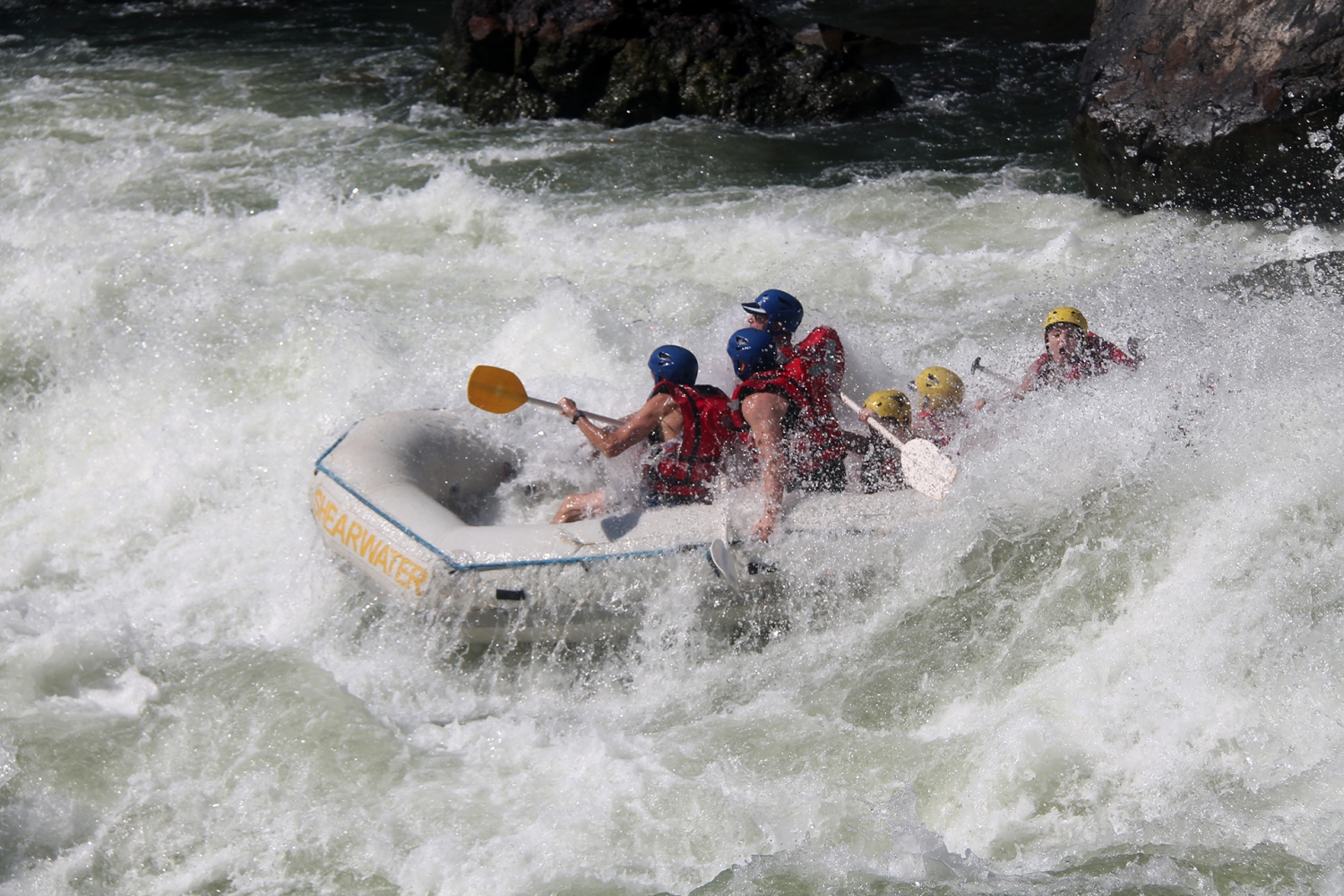 In these paddle boats you are more involved but it is definitely more strenuous. The guides often ask if you want to paddle or rather not and the teams are being built accordingly. Not in our team!

When all eight of us adventurous were in the boat, we were taught some manoeuvres and drilling exercises. Luckily, we had a real soldier from the navy of NEW ZEALAND on board. He was in charge of command in the front of the boat and did a really remarkable job. Whilst he was sitting in the front of the boat and Simon in the back, again we realised that this will not be a relaxing paddle on the river. At the same time the following is true, you can just raft the Zambezi, but with the right team, it becomes a really great experience. The rapids of the Zambezi in December are amazing, huge and a little bit frightening, too, but the team stood together. The names of the rapids were no big help to ease the respect: Stairway to Heaven, The Terminator, Oblivion, The Washing Machineâ¦ However, it was too lateâ¦ off we wentâ¦

And it was amazing. There are several other boats joining the ride and one after the other went along the river and over the rapids. We were waiting for eachother, shouting in encouragement before they entered the raft and cheering when they made it. Sometimes one fell out of the boat and another team made sure that this âlostâ one got into another boat and get back to its team afterwards.

But itâs not as if you raft one rapid after the other, there are some calm stretches between the rapids which we made use of by jumping into the water and enjoying the really stunning scenery! But as soon as Simon warned us for upcoming rapids, we were back in the boat and preparing for the next ride! We were not doing too bad at all!
Halfway through the safari, the boat including all of us passengers turned over but the so called Nyami Nyami (the Zambezi river-god) was on our side. After some gasps and fanatic paddles in the river, we all got collected and pulled back into the boat. 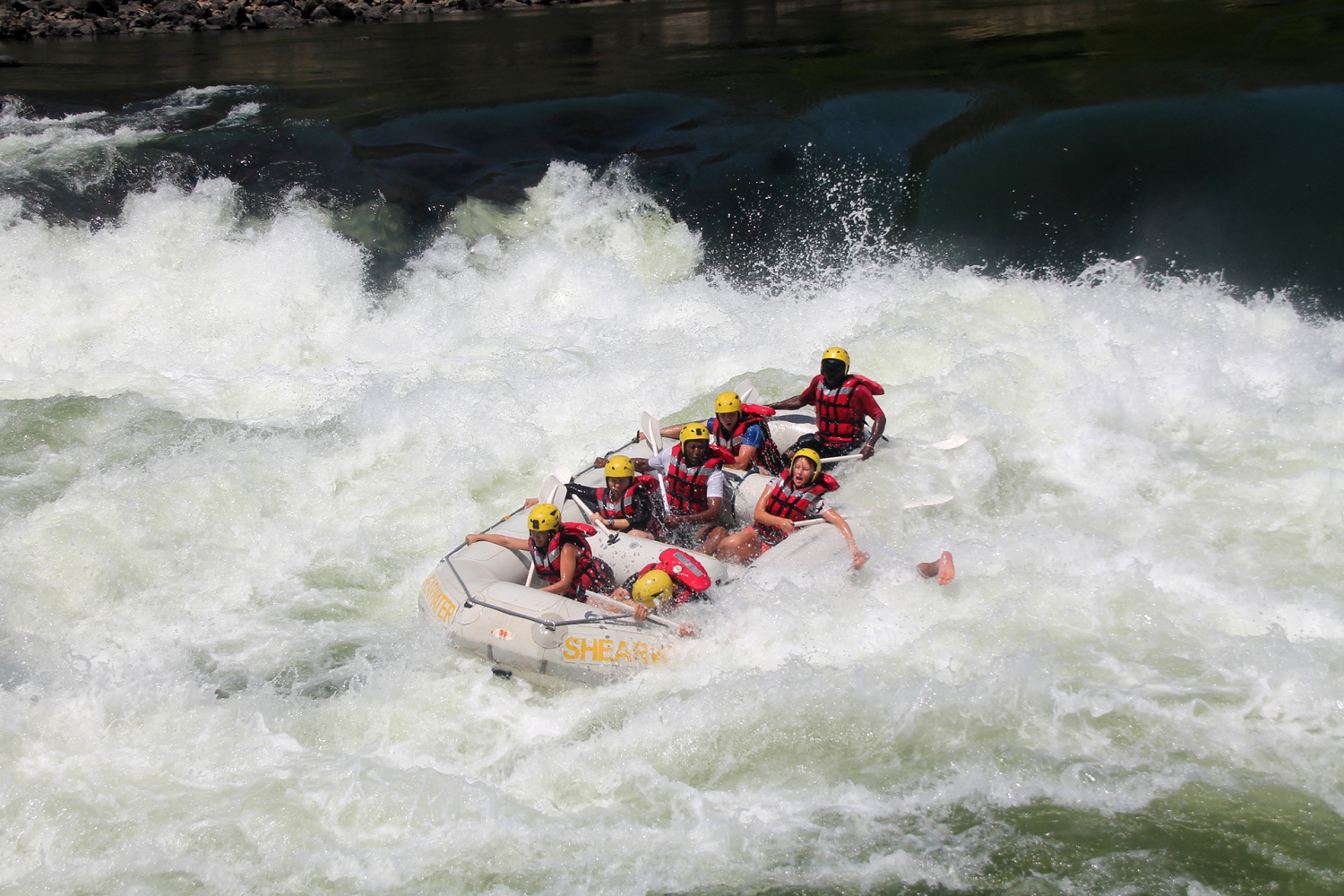 At the end of the river rafting tour, we had to climb up the gorge again. People say thatâs the most difficult part of the whole trip. It seems that this path going up is never ending. Not to leave the young locals unmentioned, who overtake you and sprint up these steep steps. But at the top of the gorge we were welcomed with some cool drinks, beers and other beverages. We enjoyed the delicious lunch served in a buffet style after our 30 kilometre rafting trip more than I can express in words. On the way back to town in the same comfortable bus some of us fell asleep until we finally got off the bus on our starting point. 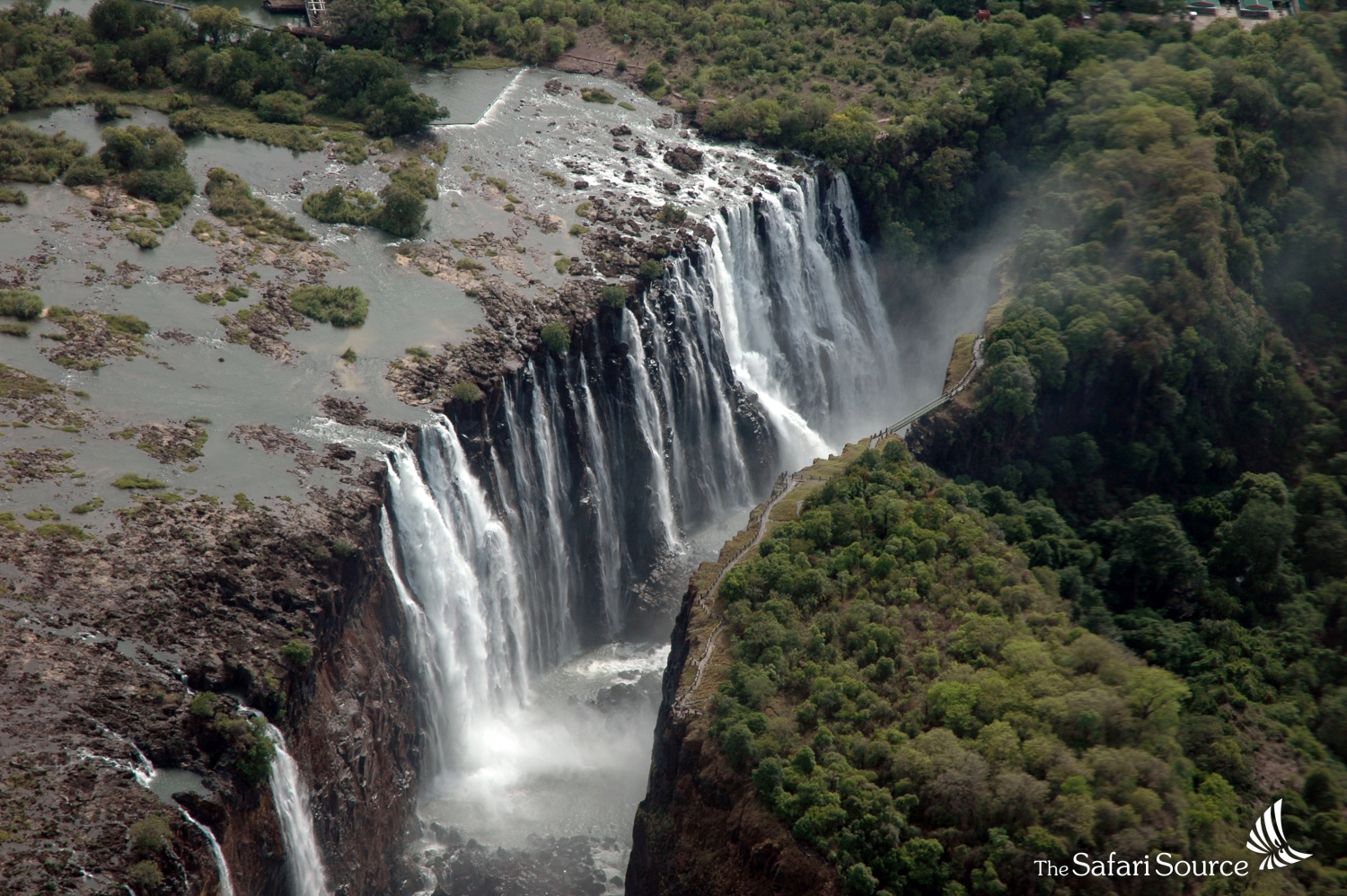 Everyone survived the enormous rapids that day! My friend lost a nose piercing but Simon said that was the tribute to the Nyami Nyami, as he is always asking for somethingâ¦.

Not only do we all keep some remarkable memories, but furthermore we remember some very nice people we met on that unforgettable trip. So thatâs why my last word will be THANK YOU TEAM!

What I learned: Appropriate clothing is important: underneath swimming wear as you get wet, covered with a (long-sleeved) shirt, or you get sunburned being in the water the whole day. A baseball style camp which you can wear under the given helmet so that you get some shade in the face and old footwear which can get wet and is not getting all heavy when soaked with water. The so-called rafters are the best shoes as they also provide you with some kind of grip when you have to hike up the gorge.

You will be supplied with safety gear such as life jackets and helmets. As for anything else that is lose on your body â donât think of taking it on the river. Any valuables, (sun)-glasses, cameras are not recommended to take with you. For any medication which is essential to take, chat to the guides as they have one water resistant box which they take and tie onto one of the boats.

Accredited to : The Safari Source